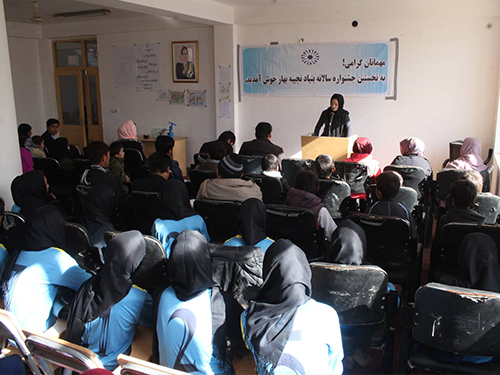 The Najiba Foundation is thrilled to announce the first successful Education and Cultural Festival in Daikundi Province. At the Festival, some 75 students (male and female) from all school levels (up to and including university) applied for the competition. The objective of the Festival was to identify and introduce emerging talents along the following themes of educational and cultural activities:

On Thursday, November 7, 2019, the Foundation conducted the final event of the Festival in Nili City, the Center of remote Daikundi Province. More than one hundred people participated in the Nili event, including local high-level officials. In the event, the Chief of Staff to the Governor Office and the Director of Information and Culture of Daikundi Province delivered speeches and thanked the Foundation for conducting such an unprecedented program in Daikundi. Following the speeches, three Festival participants read their papers and poems to the attendees.

In the final event of the Festival in Daikundi, the program office thanked all the participants. He also described the programs of the Foundation and emphasized promoting education and developing and encouraging a culture of reading in local community. Also, the Foundation awarded the top three finishers of each theme with prizes, for a total of 12 participants. In addition, the Foundation awarded all Festival participants with basic writing stationary, acknowledging their motivation and participation in the Festival. As a major outcome of this Festival, a network of volunteers to support the Najiba Library programs has been established. Each member of this network promised to support the library according to their specialization.

The Foundation leadership would like to thank Dr. Mark Pyman for his generous donation and funding this program.

Why Do We Work in Daikundi Province?

500 Textbooks Donated to the Needy Students in Daikundi